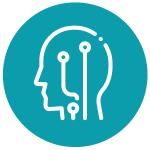 Biohacking is a term with a broad meaning, but can be summarized in the sense of improving biological characteristics by alternative means. Currently, the term is assimilated with other concepts such as “body hacking” or “DIY biology”. Biohacking also involves the use of cyber components or chemicals to modify and improve the biological characteristics of a living being. For example, microchips implanted in the hand allow access to the doors or the transmission of data when read. The CRISPR company developed and marketed genetic engineering kits with which people could modify the genes of bacteria or small animals themselves, and among the documented cases were reported including genetically modified frogs and dogs.