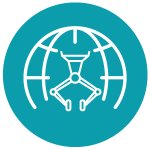 Internet of Robotic Things (IoTR) is the second stage of the Internet of Things (IoT) concept, representing the implementation of Internet capabilities at the level of robots. They are equipped with sensors and can transmit data via the Internet in order to monitor, analyze and take action on real production processes. Robots tracking IoTR technology connected to the Internet can receive information from sensors that are not spatially in the same place. For example, in the event of a fire, an intelligent robotic elevator can receive information from the building’s sensors about the extent of the fire, shutting it down when it estimates that its integrity could be compromised by the fire. This would ensure the correct and efficient use of the lift in the event of a fire. Other examples include robotic systems at Tesla, where a horizontal elevator transports cars following a magnetic tape based on sensors, or in the case of Amazon, where robots on the distribution line receive information about the volume of products on the belt, closing if they are no longer needed in order to save electricity.